This page is for individual purchases of our Fundamentals of TIC course. For group purchases or to register someone else, please click here.

This course is roughly four hours of instruction and was created to meet the needs of people who want a basic understanding of Trauma, what it means and how it impacts people.

It’s delivered as a self-study course and can be taken on one’s own time and at one’s own pace.

This course is roughly four hours of instruction and was created to meet the needs of people who want a basic understanding of Trauma, what it means and how it impacts people.

It’s delivered as a self-study course and can be taken on one’s own time and at one’s own pace.

Like our longer Core Training, this course was created from a live, three-day conference in Colorado Springs, conducted by the Colorado Professional Development Center. CPDC has certified over two hundred people as Trauma-Informed Practitioners, from therapists to soldiers, and everything in between.

For this event, fifty three people took time away from work and traveled to Colorado in planes, trains and automobiles, stayed at a conference center, and experienced three very intense days of training.

CPDC’s reputation as TIC trainers is impeccable. Due to their thoughtful and experienced teaching, many of their students have altered the course of their lives, careers and/or personal relationships. 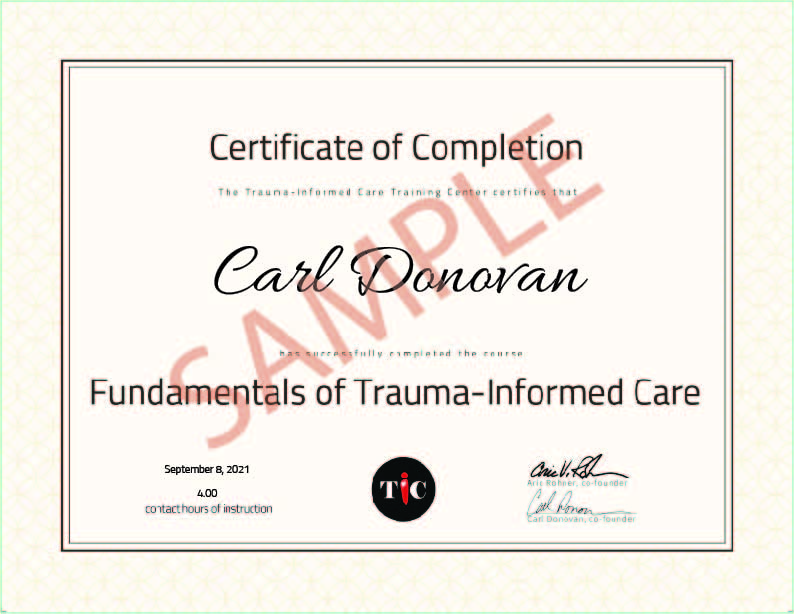 Why Train in Trauma-Informed Care?

Who Can Benefit From This Course? 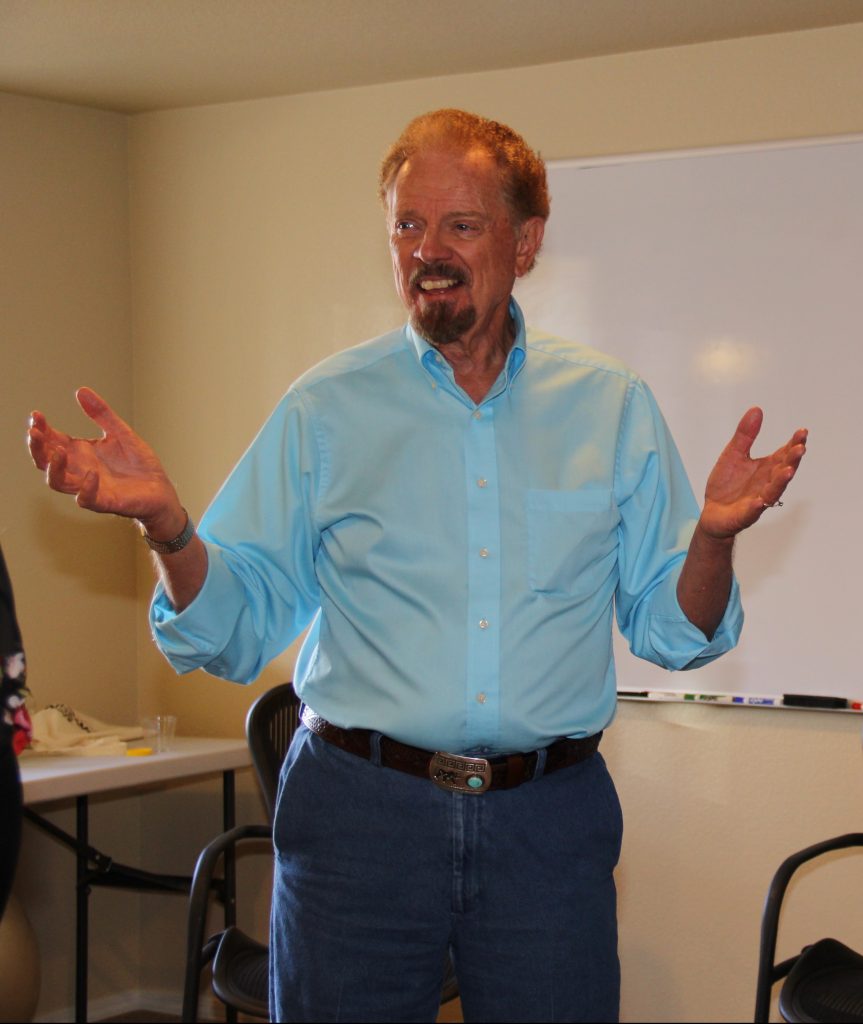 Barry K. Weinhold received his Ph. D. in Counseling Psychology (an A.P.A. Approved Program) in 1968 from the University of Minnesota. He taught at Ohio University and the University of Wisconsin at Green Bay before founding the Counseling and Human Services Program at the University of Colorado at Colorado Springs. After teaching for over 30 years at UCCS, he retired as Professor Emeritus in 2001.  He currently serves as CPDC’s Continuing Education Director, and also co-directs the Colorado Institute For Conflict Resolution & Creative Leadership (CICRCL), which he and Janae co-founded in 1986. Barry has been a licensed psychologist in the state of Colorado since 1976 and has a small private practice specializing in working with men.

Barry is the author or co-author of over 65 books and he has made over 100 presentations at professional conferences. His latest books are The Wise Elder, and the co-authored, Conflict Resolution:  The Partnership Way. Both books are available from Amazon in e-book and print formats. The Wise Elder book is the third in the Real Men Series. This series offers support to men wishing to develop the often-ignored feminine side of their personality. His previous books are about developmental trauma, conflict resolution, family counseling, codependency, counterdependency, and Twisted Beliefs, about how people form their values and beliefs and what causes them to become twisted.

Barry also served as a consultant to the United Nation’s 1994 International Year of the Family. Operating out of the UN Centre in Vienna, Austria, he helped to found the Bratislava International Family Training Centre, in Bratislava, Slovakia in 1992-93.

Barry has been meditating daily since 1978 and he also practices yoga. He is an avid fly fisherman. He also enjoys hiking in the mountains and eating good food.

Janae Weinhold has her doctorate in Developmental Psychology from the Union Institute, is a Licensed Professional Counselor in private practice, and a clinical specialist in attachment and developmental trauma. For fourteen years, she also served as Adjunct Faculty in the Counseling and Human Services Program at CU-Colorado Springs where she taught advanced clinical courses in Developmental Process Work. She served for six months as the Mental Health Coordinator for the Child Care Response Project in Colorado Springs and has been providing mental health training for early childhood and childcare professionals since 1997.  Since 1994 she has been conducting ongoing training in practical psychology, and providing social and psychological consultation services for Ukrainian psychotherapists through partnerships with organizations in Kiev, Ukraine.

Janae co-directs CPDC and the Colorado Institute for Conflict Resolution & Creative Leadership (CICRCL) in Colorado Springs, CO. At CPDC she provides professional supervision and consultation to mental health practitioners, and co-leads CPDC’s Trauma-Informed Care Certificate Trainings. She also presents at conferences on various topics related to developmental trauma. The theoretical and practical model that she and Barry created identifies the Disorganized Attachment Style and its associated developmental shock, trauma and stress as a major cause of intractable relational conflicts, delayed development, and human suffering.

Janae has authored or co-authored ten print books, twelve e-books, and numerous professional journal articles in developmental psychology, counseling and conflict resolution, and has presented on these topics at many national and international conferences. In 1992 and 1993, Janae spent a year on assignment as a Family Life Consultant, volunteering at the United Nations Centre in Vienna, Austria during the International Year of the Family. Here she co-authored papers on family life education, served as a delegate to numerous UN conferences and meetings and served as UN liaison representative with the Ministry of Labor, Social Affairs and Family in the Slovak Republic.

Janae’s passion for developmental psychology and children’s mental health issues is fueled by her love and concern for the future of her three grandchildren and the challenging social conditions that they and other youth face in their young lives. She is also a swimmer and loves roaming the mountains of Colorado and the Southwest.

Have a question or concern about this course?

Does this training provide CEUs?

Kind of yes, kind of no.

CEUs are a tricky thing. There are thousands of governing boards for the hundreds of fields we're trying to reach with TIC. Every one of those boards requires submission, review, approval, etc.

In order to jump through all those hoops we'd need a full time staff member - whose sole job is pleading for board approval. That, in turn, would drive up the cost of the training.

Instead, we've found that asking your governing board to consider approving your training prior to registering has proven successful for many, many learners.

If your board gives the official OK, the training is good for 4 contact hours.

Is TIC an Evidence-Based Practice (EBP)?

Our training is not a single, specific practice.

Instead, it presents a systematic, eclectic framework for healing developmental trauma.

Developed over thirty years of clinical research, this framework's theoretical and clinical components are drawn from a variety of trauma-informed, evidence-based practices including but not limited to:

How long do I have to finish the course?

As long as you want! There are no time limits or restrictions.

Are there any Power Points with this course?

No, there are no Power Points with the course, it's all online content delivered via a Learning Management System.

How many hours is the course?

The course is roughly four contact hours of instruction.

We want you to be happy with your online learning purchase. If, for whatever reason, you’re not 100% satisfied, simply ask for a refund within 14 days of your purchase and we’ll promptly issue you an almost-full refund.

Stripe, our payment processor, recently changed their policy on refunds and no longer returns the 3% they charge us to facilitate the transaction.

Therefore, you will receive a 97% refund if you request it within 14 days of purchase.

Note: No refunds will be issued if you’ve completed the training you purchased or received a certificate of any kind.

Please confirm you want to block this member.

You will no longer be able to:

Please note: This action will also remove this member from your connections and send a report to the site admin. Please allow a few minutes for this process to complete.

You have already reported this .